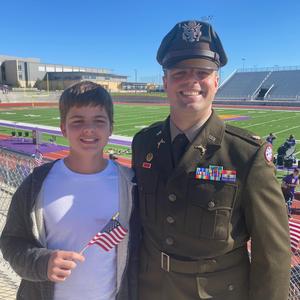 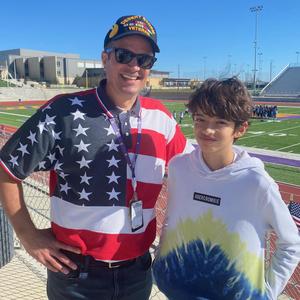 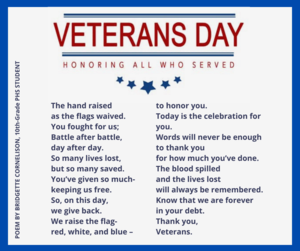 Campuses across the district paid tribute to military veterans with student performances and events honoring their service. Parents, staff and community members who have served were special guests at these annual Veterans Day celebrations.

Nov. 12, 2021 - Annually, students, parents, faculty and staff honor local veterans with special events across the Comal Independent School District in recognition of Veterans Day. This year was no exception with student performances by dance teams, choirs, bands and more.

The newest campus in the district, Pieper High School, partnered with its neighboring campus, Pieper Ranch Middle School, to host a Veterans Day program for community veterans to enjoy. The day began with light refreshments and fellowship at Pieper High’s outdoor stadium and was followed by a student-led program honoring the special guests.

Student organizations from both PHS and PRMS involved include the JROTC, student council, band, choir and dance team. Student Council member Lincoln Soos, 10th-grade PHS student, spoke to the crowd about the legacy of service, explaining how each generation of veterans inspires the next generation. He has been inspired by his own family’s military service record going back to the Revolutionary War in 1776.

Student Bridgette Cornelison, also a 10th grader at PHS, shared a poem she wrote in honor of veterans reciting in part, “We raise the flag, red, white and blue, to honor you. Today is the celebration for you. Words will never be enough to thank you for how much you’ve done.” (Read the entire poem in the graphic.)

Here are just two of the 85 veterans in attendance and their service.

Maj. Thomas Boler commissioned into the Army in 2009 and is currently serving as a full-time member of the Action Guard Reserve program as well as the Force Protection Chief for the 4th Expeditionary Sustainment Command (ESC) at Ft. Sam Houston.

“It’s always nice to be appreciated in this way,” said Boler about the day’s program. “It’s especially nice to have young people exposed to military traditions. Hopefully, it helps to demystify military service.”

Capt. Patrick Wright served six years in the Army from 1990 to 1996 after being commissioned through the ROTC program at Appalachian State University in North Carolina. Currently, Wright serves a paraprofessional at PHS in his first year with Comal ISD and has been teaching for seven years.

Wright and his wife, Araceli, have two children who attend Comal ISD campuses including Aidan, 17, a senior at Smithson Valley High School, and Caleb, 12, a seventh-grade student at PRMS.

“I always wanted to serve in the military,” said Wright. “I believe in service, and it is important to recognize our veterans. We have a lot to be thankful for in the United States.”

Thank you to all the veterans who joined Comal ISD students and staff in this year's Veterans Day events.