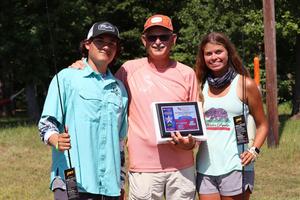 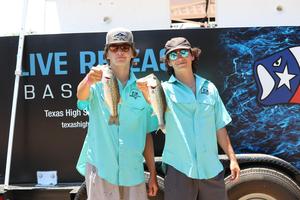 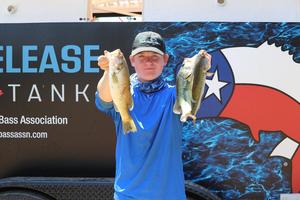 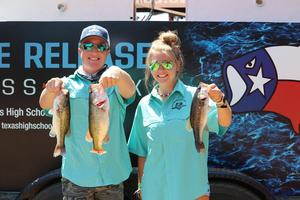 Two student anglers and members of the Comal ISD Bass Fishing Club are heading to the Hill Country Division: Lake Belton State Tournament July 25. They are currently tied for second place in the state - pretty impressive for the program's first year.

The team of Evan Velez and Abigail Spence will represent the close to 20 students who make up the Comal ISD Bass Fishing Club at the state competition. The duo earned a spot after placing fifth among 112 teams in the Lake Sam Rayburn Regional tournament on June 13. Two other Comal ISD teams competed that day as well. The team of Mattie Jung and Tyler Jung along with Kole Hedemann and Lucas LeMore. Three Comal ISD teams competed on the second day of the tournament, June 14. They included the teams of Mason McClellan and Luke Shaffer; Grady King and Silas East; and John Reeves and Slade Falkenberg.

Club members have competed in a total of four tournaments throughout the year in order to qualify for the regional and state competitions. Along the way, they have left their marks, placing  high in the rankings for Angler of the Year honors.

Students and coaches are proud of what they’ve accomplished in this first year and look forward to growing the program. As members of the Hill Country Division of the Texas High School Bass Association (THSBA), the Comal ISD Bass Fishing Club currently has two high school campuses involved, Canyon Lake High and Smithson Valley High.

The Bass Fishing Club is part of the district’s intramural sports program. Anyone interested in learning more should email comalfit@comalisd.org.

Read a previous story about the Club here.

-Grady King and Silas East are among the close to 20 students to participate in the inaugural year of the Comal ISD Bass Fishing Club.

-Mason McClellan is a member of the Comal ISD Bass Fishing Club.

-The team of Tyler Jung and Mattie Jung placed eighth among 64 teams in the Angler of the Year rankings for the Hill Country Division of the Texas High School Bass Association.